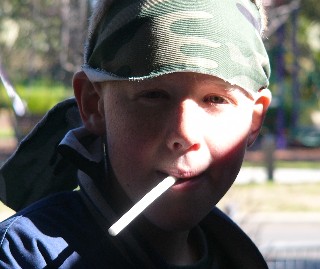 (Don't worry parents - we're not encouraging smoking at our Homeschool History Day;
This foam stick was really supposed to be used in the construction of planes/weapons and so on ... but you know boys!!)

On July the 18th, my son, Ben organized a Homeschool History World War 1 Day. Together with his family and a heap of friends, he enjoyed a full, entertaining, educational and inspiring day! This is his account of what was involved and what happened on World War 1 Day!

This is the World War I Day, in my own words as the organizer.

As the kids arrived, they started by matching plane symbols to the names of countries. Then we went downstairs and I told them a bit about the day and that each activity would be rewarded with pretend money. With that money they could buy their Lunch and at the end of the day buy some lollies, etc.

Next we made paper planes making paper planes. I told them that the planes in the world war weren’t that reliable and they should try to do a better job. We had two competitions

We did this at the park over the road.

Causes and Consequences Acting out World War I

When we returned I did a talk on what was happening in the day. Nathanael took over and talked about causes and consequences of World War I. Then we divided up into four groups. Each group was given a short description of a World War I event and they needed to make a little play about it. They had three minutes to do this. When we got together, all the groups acted about their plays and everyone else watched. They acted out:

These were all different battles and events which happened to the ANZAC's in Gallipoli, World War I. 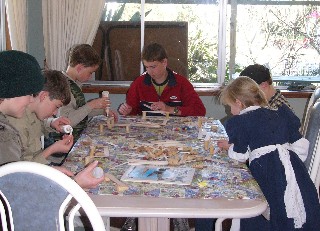 Then we divided all the children into two groups. One of the groups went upstairs and built Lego cannons, while the other group made model planes out of wood, popsticks, and glue.

The people upstairs (after they had made cannons out of Lego) went into my room and had a battle with soldiers and cannons. Each person had 7 men and a handful of marbles. With their cannon, they shot over into the enemies' trenches. The Trench and No Man's Land was 20cm high and the cannons had to shoot over No Man’s Land, the barbed wire and into the other trench. When their men were knocked over, they died and were not able to shoot. 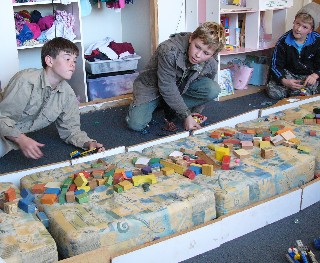 Firing the cannon was very difficult. Because the shooters could not even see into the other trenches, it made it very difficult to aim. As the game went on, it became easier. Then, after we were given shillings and pence for all our efforts (we earned money when we had men left standing; the most accurate cannon, interesting plane designs etc), we went downstairs and with our money, we were able to buy sausage rolls. Then we finished off the war game and the model making and went over the road and played soccer. 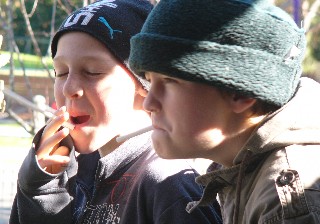 By this time, it was lunch. We had Bully Beef for lunch - something the whole army had. We also could buy bread, cheese, apples and jam. We also smoked a foam stick, which Corey invented. He then started selling them.

We then swapped so the people upstairs made models downstairs. The people downstairs went upstairs and built cannons and then played the Trench Warfare game. There were some terrific designs made. Tall catapults ( Caleb and Ezra), unsteady catapults, double shooter catapults (Jacob) and we also had one cannon (Adam). 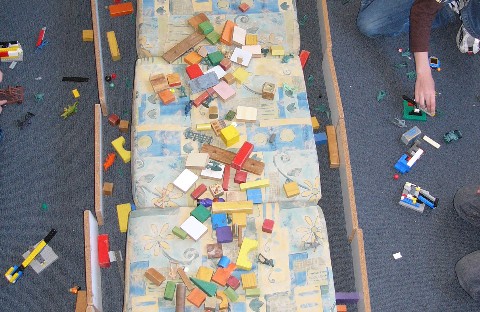 After those games, we all played Mission Impossible in which you needed to follow clues through the bush. The boys and girl went very quickly through this activity and finished faster than I expected. There were a few mishaps, and the wind took a few clues away, which I had planted early in the morning.

We then went home and did some more construction work and built some Morse Coders.

Finally, we played a game of Bull Rush. If you where tipped you were in, but could not move and it got harder and harder as we went along because there were more and more people being tipped. The people tipped became pretend barbed wire and if tipped by them you became barbed wire too, and so you could not move either.

Nathanael played a Question and Answer game, checking everyone's knowledge of World War 1. If you thought the answer was "true", you needed to put your hands on your head; If you thought the answer was "false", you would put your hands behind your back. Everyone had to close their eyes, so they wouldn't change their minds. If you were right, you remained standing, otherwise, you sat down and were out of the game.

At about 4p.m. everyone counted the money they had earned through the day, the games, construction work, competitions and then everyone bought lollies, and had lots of food and drink.