A Language Arts Lesson Plan based on Literature

On my page:  Ways to Teach Writing, I described four ways to add stylistic elements to teach writing.

So, basically what you need to do when creating your own language arts lesson plan based on the literature you are using, is to use the best excerpts and apply different stylistic elements to it..... and then do it again and again ... with different literature.

You may like to go to my 10 Step Writing Outline to help you.

These writing lessons are organized according to the main focus of the lesson.

The Boy who cried Wolf 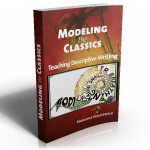 There was once a shepherd boy who cared for the sheep for all the people in the village where he lived. Every morning he collected the sheep from their owner's and drove them out carefully and brought them home again.

Day One
Copy this passage out neatly. Take care to put in the capital letters and full stops.

Day Three
Diagram the sentences using only nouns and verbs; Nouns and verbs are on a horizontal line; A vertical line separates a noun from a verb.

Use the nouns|verb diagrams from Day Three, and alter the words using a thesaurus.

An Online Visual Thesaurus is a heap of fun. It really is very visual and gives you wonderful ideas on different ways to express yourself.

Also add interesting describing words (adjectives) to the nouns.
For example: The frightened boy|shouted; The tall, brown-haired boy|looked after; and so on.

Proof-read, improve and re-write the whole sentence using your own ideas. 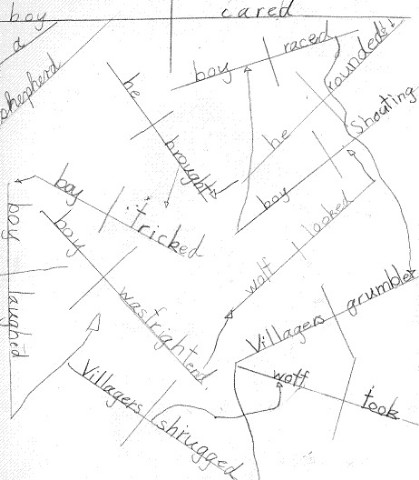 This Language Arts Lesson plan can be used as is or adapted to suit any sentence or paragraph of your choosing.

Experiment and play around with words! You can see how this can be diagrammed here.

Main Focus: To copy the Descriptive Style of the Author

Text:  An excerpt from, "By Pike and Dyke" by G.A.Henty

The landlord, who was leaning against his counter,did not advance to meet him; for strangers were by no means popular, and a suspicion that the new-comer was a spy would speedily empty his house.

Day One: Copy the passage.

Day Two: Diagram the passage or just one sentence.

Steps to Diagram: What is the subject of the sentence? "Landlord".What did the subject do? "did advance" (verb)How did he "advance" ? "not" (adverb)Which landlord was it? "the" (article/ adjective) "who was leaning against his counter" (relative clause)Subject-Verb- What? The landlord did advance what? "to meet him" (inifinitive phrase)Why verb? Why did he not advance? "for strangers were by no means popular" (adverbial clause, from 'did advance')Why verb? Why did he not advance? " a suspicion would empty his house." (adverbial clause from 'did advance').What suspicion? "that the new-comer was a spy" (adjectival clause from suspicion).
All nouns and verbs are on horizontal lines.
Adjectives are on a slanted line under the nouns.
Adverbs are on a slanted line under the verbs. 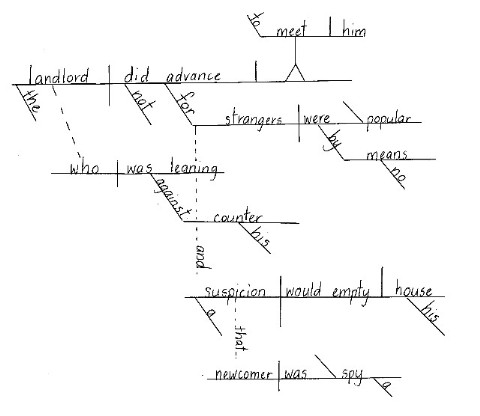 Diagramming the passage from "By Pike and Dyke" by G.A.Henty

Day Three: Identify the stylistic elements in the writing. Write your own basic sentence without prepositional phrases, adjectives, adverbs (decorations).

G.A.Henty uses adverbial and adjectival clauses.
Own Sentence example: The boy cycled to the cricket.

Day Four: Add to your sentence in a similar style to the author. Use the diagram from Day One, and copy this as a model.

Day Five: Proofread your sentence; Edit it and write your final copy.

Example: The young boy, who loved sport and also many musical instruments like the trombone and violin, but especially the piano which he played nearly an hour a day, cycled to the cricket and you could not imagine his joy when he found out his piano teacher was there.

This Language Arts Lesson Plan can be adapted easily to other literary passages.

Text:  The Fox and the Grapes - Aesop

One hot summer's day a Fox was strolling through an orchard till he came to a bunch of Grapes just ripening on a vine which had been trained over a lofty branch. "Just the thing to quench my thirst, " quoth he. Drawing back a few paces, he took a run and a jump, and just missed the bunch. Turning round again with a One, Two, Three, he jumped up, but with no greater success. Again and again he tried after the tempting morsel, but at last had to give it up, and walked away with his nose in the air, saying, : "I am sure they are sour."
Moral: It is easy to despise what you cannot get.

Day One: Copy the fable.

Day Three: Keeping the moral in mind, put the fable into a different context with different characters. Using the keyword outline, substitute their words for your own - making it the basis for your own fable.

Day Four: Re-write the sentences using your own keywords this time. Look at the chart of Sentence Openers. Begin each sentence in a different way.

Into the caste, went the robber in black. (Prepositional Phrase).
He found the gold crown with gems in a glass cabinet. (Subject).
Sensors were everywhere so he crawled close to the ground, but the alarm went off.(subject)
Crossly, he escapes and was heard muttering. (Adverb)
"Anyone could see it was not pure gold!" (speech)
It was fake, fake as a doll! (subject)(use of a metaphor)
People pretend to despise what they cannot have.

Day Five: Edit and Proof-read your work. Re-write your final copy neatly into your Writing Treasure.