On the 7th of December, while we were playing outside, Ben found a stick insect on our front fence. The stick insect eats at night and is very still in the daytime. It is camouflaged really well by hanging upside down very still so no one sees it. It eats eucalyptus leaves and bottle brush leaves. We thought it may have come down from the top of the bottle brush tree to lay eggs.

One day we brought some bottle brush leaves into our terrarium where we keep the Titan, so that the Titan could eat some leaves. There was a baby stick insect in those leaves and we kept him with the big Titan.

After a few days, we didn't know where the baby one was.
Then we read that sometimes the female eats the males and we think that she is a female and that she probably ate the small stick insect.

Our Titan is about 24-25cm long from his head to the tip of his tail. She is the longest stick insect in Australia. Her Latin name is: Acrophylla titan, female, subfamily Phasmatinae.

Here's another photo of her: 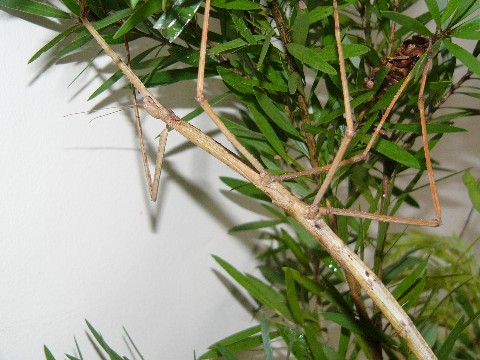